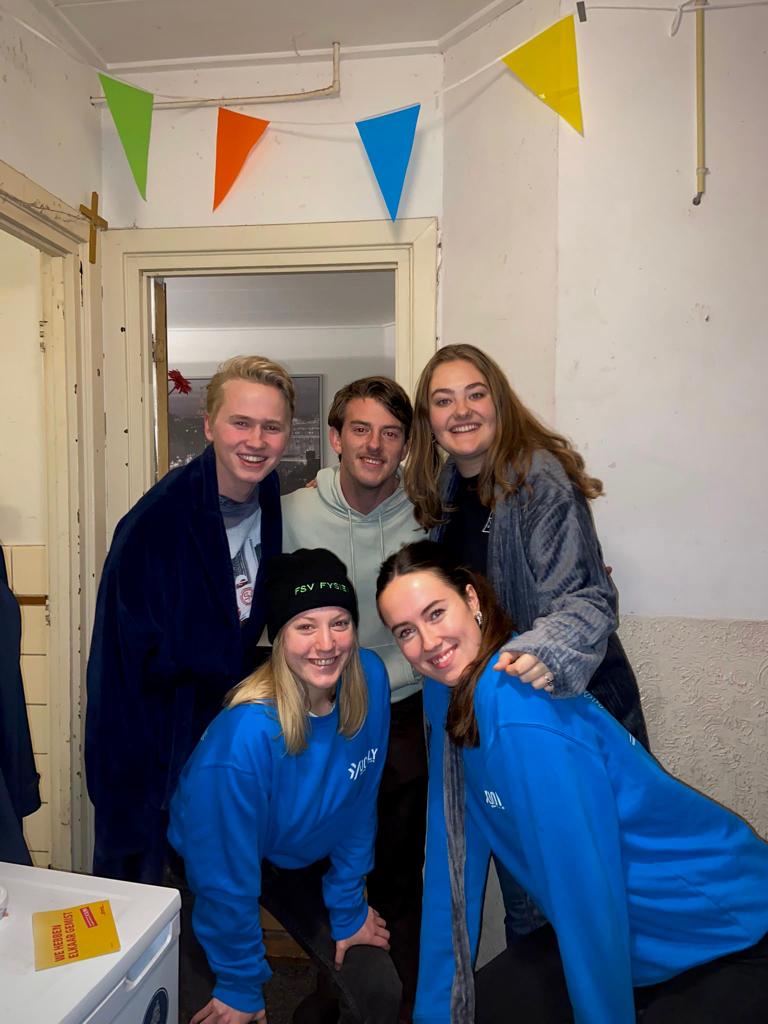 Last but not least we have our chairwoman for this year, Jildou. Last year, Jildou was part of the iCie and had such a successful year that she too wanted to reap the benefits of this great study association for another year. For the third year, this seasoned physicist is again at home in all fields and can thus carry the committee with her extensive knowledge. Unfortunately, Jildou does not yet put the MerCie on the map very well, because until now she is Mrs. Rattentaxi. Despite these actions, we do appreciate Jildou and at least at the times she is there, she trekt haar bakken (relative to Giel and Tessa). If you do happen to witness this rare phenomenon once, make sure you get her drunk.

This enthusiastic volleyball star is this year's secretary of the MerCie. Tessa joined us after Wintersport last year and has been a fixture at Fysiek ever since. Tessa is in her third year of training and also in Davey's class, how cozy! What is less cozy is that she enjoys volleyball so much that she sneaks out every week. When Tessa does attend, she is sharing her typing skills with the committee and likes to take inventory of all the juice that is discussed within the 15 minutes. Should she stay any longer, a delicious bottle of red wine awaits her.

Giel de la tourette is our blonde bouncy ball and also likes to be very active at Fysiek. He is now in his 2nd year of training and is also the mentor daddy of class 1IJ. He has taken on the role of treasurer this year, only he is already showing that Davey would have been better off taking on this role again. Furthermore, Giel enjoys working at the ice cream salon in Enschede, from which he regularly brings back ice cream. Jildou really appreciates this, but say it yourself, who doesn't! Furthermore, Giel likes student life very much and can therefore be found in the city regularly.

This senior bodybuilder is a 3rd year student and active in Physique for the 2nd year. Since he enjoyed the StuCie so much last year, he decided it was time to put his creativity to the test. Here he can't quite find his skills yet, so until then he is working on his profession as a chef to keep the rest of the committee happy. Furthermore, Davey really enjoys going out on the town in addition to his hobbies. However, he often doesn't want to know about it, but with a few nice beers his backbone disappears like snow in the sun. If you ever run into him, be sure to ask him about a few random facts. He'll be happy to talk the ear off your head.

Tooske is our newest addition to our committee, but is of great value to us because Tooske has her own design company called CustomToos which she loves to put her energy into. The only question now is whether she wants to help us too, but I'm sure that will work out. At least she listens to what is asked of her and is certainly not a small player (compared to Giel and Tessa). Furthermore, this is Tooske's 2nd year and she joined Fysiek on her own. We hope that Tooske can also represent the MerCie well around town, but why else would her nickname be TanteToos! Funnily enough, she has never been out and about (HOW THEN), so we don't know how she got this nickname either.